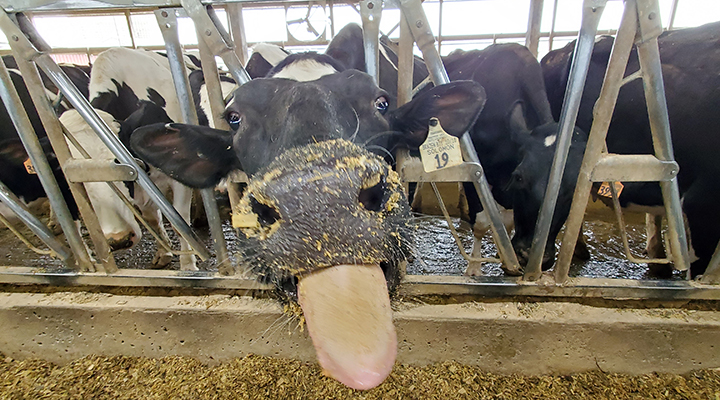 Your cows are your proof. Cow performance tells the producer exactly what is going on. It’s not just pounds of milk produced either; the gleam to their eye, sheen of their coat, and consistency of their manure are all indicators to their health and wellbeing.

Priority has data to prove the Smartbacteria in P-One™ stabilize and maintain rumen pH, that the Smartbacteria in Gold Spike™ inhibit pathogens, and the Smartbacteria in StartUp™ Gel activate in the rumen and drive consumption. But there is no greater data than the proof on farm with cow performance. This is why Priority strongly believes in the cows. The cows are the proof and show producers firsthand as their dairies are their own research-proving site.

Below are comments on the proof other producers have seen with Priority and Microbiology Nutrition:

“Now I listen to my cows, not people. Cows speak the truth, people lie. I know some of these nutritionists don’t know better, it’s not what they are taught or open to,” explains Noah Weaver. “The most frustrating thing is knowing all these other producers are being told don’t believe their cows. I am willing to speak to others about my experience and what I have learned and uncovered to be different, but accurate.” Learn more in Priority Report Volume 47.

“We don’t see those cows crashing anymore. We don’t get to 200-250 days in milk and all of a sudden see their rumination crash. We can track so much more with the robots and we can watch the cows so much better. We feel that we just don’t get those crashes anymore, they hold more consistent milk throughout their lactation,” shared Mitch Schwieterman. “I’ve heard from numerous people that the way our cows look is different. And with the robots we see more data, we see the activity levels are better. The cows have nicer coats and are more consistent on body condition.”

“Before the ketosis would cause a DA. Our ketosis situation is pretty much eliminated. We haven’t treated ketosis for months and months now, “ Brad Schwieterman adds. “Our foot health is the best it’s ever been, and that’s according to our hoof trimmer.” Learn more insights from the Schwieterman’s robot dairy farm in Priority Report Volume 45.

“I have seen beneficial changes in almost every aspect of the cows, as far as health wise, states Lamar Horst. “The cows come in and they take off, it is rare that you get one that doesn’t. Definitely better than it was. When they come in, the fresh cows are on feed. They aren’t sluggish. They come into milk and don’t take long to produce. We don’t lose fresh cows anymore.”

“We have less cow issues and challenges than we did before. The cows have a lot less stress in the herd. The cows are a lot happier,” echoes Harold Horst. “The one thing I really appreciate with Priority is everything is explained. The transparency and education is all there. Working with the Priority team and Nathaniel Steiner (local Authorized Reseller) has helped us move forward, teaching us and explaining along the way.” Hear more in Priority Report Volume 46.