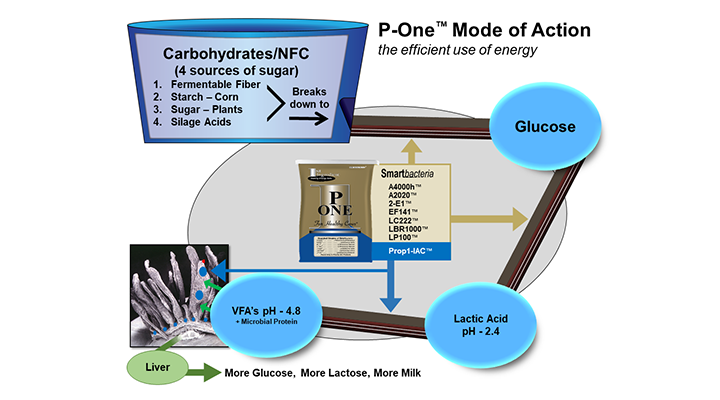 There’s a misunderstanding out there. We hear from calls, talks in the field, and discussions with producers that others say Priority is about feeding high starch or high grain rations - That isn’t true.

Microbiology Nutrition allows for producers to feed a nutrient dense ration. Priority formulates a high NFC diet to allow for producers to maximize the nutrients and energy available, making the ration as dense as possible, so the cows get their needs with less.

There is a misnomer that energy is just starch. Microbiology Nutrition looks at energy as coming from carbohydrates, NFC, as it should be. NFC is comprised of fermentable fiber, sugar, silage acids and starch – Not just corn. While starch is a part of NFC, it’s not the only component.

NFCs are simply carbohydrates that through fermentation are broken down to glucose. Fermentation is driven by microorganisms. As producers are making higher quality forages, plant genetics have been enhanced, and along with the processing and harvesting of feeds is making more fermentable and highly available feeds that yield more fermentable fiber, sugars, and silage acids– More NFC from these components rather than more starch; thus, trapped with more health issues!

Smartbacteria stabilize and maintain rumen pH. Priority has built principles to apply Microbiology Nutrition to be able to dense up the diet and reduce the intakes to get the same, or greater, energy load with less pounds of intake. This provides efficiency for the cow, ration, and producer.