Is straw in your ration really a good idea? 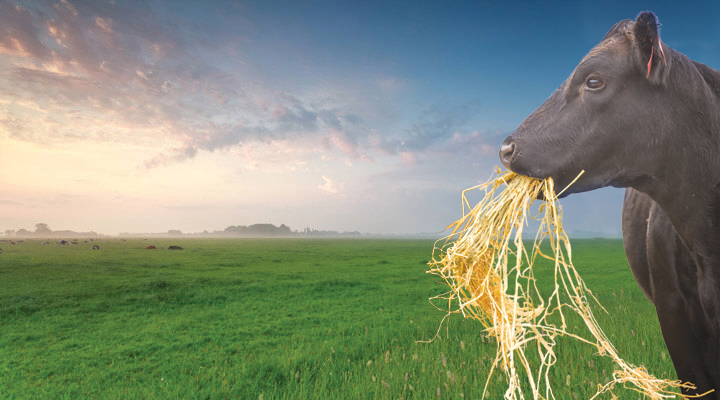 Producers work hard to grow and harvest the best quality forages. Many are then told by their nutritionists that the feed is too good, that there is a need to slow things down. They are then told to add in subpar additives, like a pound or two of straw or poor dry hay.  These things take up space from something that can be used; thus, decreasing energy as they cannot be fermented.

The misconceptions about the need for straw, poor dry hay, and particle length; research may have shown a production increase with this method only because the cow feels better with less to digest, less energy, thus a more stable pH as the straw took up space in the rumen. Understanding how microbiology and nutrition work together in the rumen, the pH can be stabilized in a more efficient way.

The cost of straw is rising. Once the grain is harvested, the straw tends to lay in the field where it is exposed to the elements picking up mold and contaminates from dew, rain, and the soil.

Straw is simply ADF and lignin, wood fiber taking up space in the rumen. It is indigestible, thus it lowers energy. It is an expensive pass-through ending up right back in the manure – Anything that is not digested is simply a pass-through.

The key is microbiology nutrition. Recognizing fermentable fiber is a carbohydrate, so is corn.  Making forages early maturity and wetter simply increases the percent to be fermented, along with the rate of fermentation – This is energy density. If ruminal pH is maintained, this is a good way of maintaining or increasing milk production on the same or less intake. The idea of pushing intake is old thinking, and it isn’t efficient. The new is the use of microbiology. Getting rid of the wood fiber for fermentable fiber, increasing the energy density so the cow doesn’t have to eat as much to make more on less with optimum health simultaneously.

“I was very hesitant because it was so much different (not feeding straw) than what anyone does and what we had been accustomed to. What we were doing before Priority wasn’t the same thinking…I’m not college-educated and I’m not into the real fine details of digestion, but Priority’s approach certainly makes sense. I had to take a leap of faith,” shares Charlie Bean, Rolling Spring Farm. (Priority Report - Volume 39: Frustration to…Optimism!)

“It (adding 2-3 lbs of dry hay) was kind of a pain to do and it didn’t fit our set-up, but I was doing it because it was the university recommendations, that you needed that particle length and length of cut of dry hay in the ration,” shares Doug Harre. (Priority Report - Volume 29: At 100lbs/cow/day and 31,000lb herd average)

“You have to have an open mind with how you do things today. Working with Priority has definitely helped us progress in the right direction today. With Richard’s resume and what he accomplished at Clover-Mist, that’s huge…It all goes back to my meeting with Richard, when he explained the straw diet being nothing but a roadblock. After we changed the dry cow diet, it’s like the gates opened. We’ve been taught the wrong way forever, there is a better way! This is the better way and we’re going to do it,” reflects Jake Hein, Nor-J Farms. “When we switched from a straw diet to the Priority ration, there was 23 different ingredients just in the old mineral mix. Today the Priority diet is six mineral ingredients with corn silage and hay. It’s amazing how simple it is,” says Jake Hein, Nor-J Farms. (Priority Report - Volume 38: Fed up! We Went a Different Way)

“We were making really good forages. Our nutritionist had used the solution to add straw into the TMR. That was their feel good solution because we made such good forages, they didn’t know how to handle it…I think nutritionists love the straw diets because it makes them a lot of money. They can sell a lot of ingredients,” says Jay Hein, Nor-J Farms. (Priority Report - Volume 38: Fed up! We Went a Different Way)

“The gases the bacteria produce cause the rumen mat to expand. You can have shorter/small pieces, you don’t need these big long pieces to get the rumen wall stimulated,” notes Ken Schneider. (Priority Report - Volume 41: A Thought Provoking Discussion)

“The cow doesn’t go to the pasture to eat the tall grass, she goes to the short, lush grass because she can ferment it efficiently and it contains more energy,” observes Richard Breunig. (Priority Report - Volume 41: A Thought Provoking Discussion)

Particle length is another misconception that can be dispelled with microbiology nutrition. 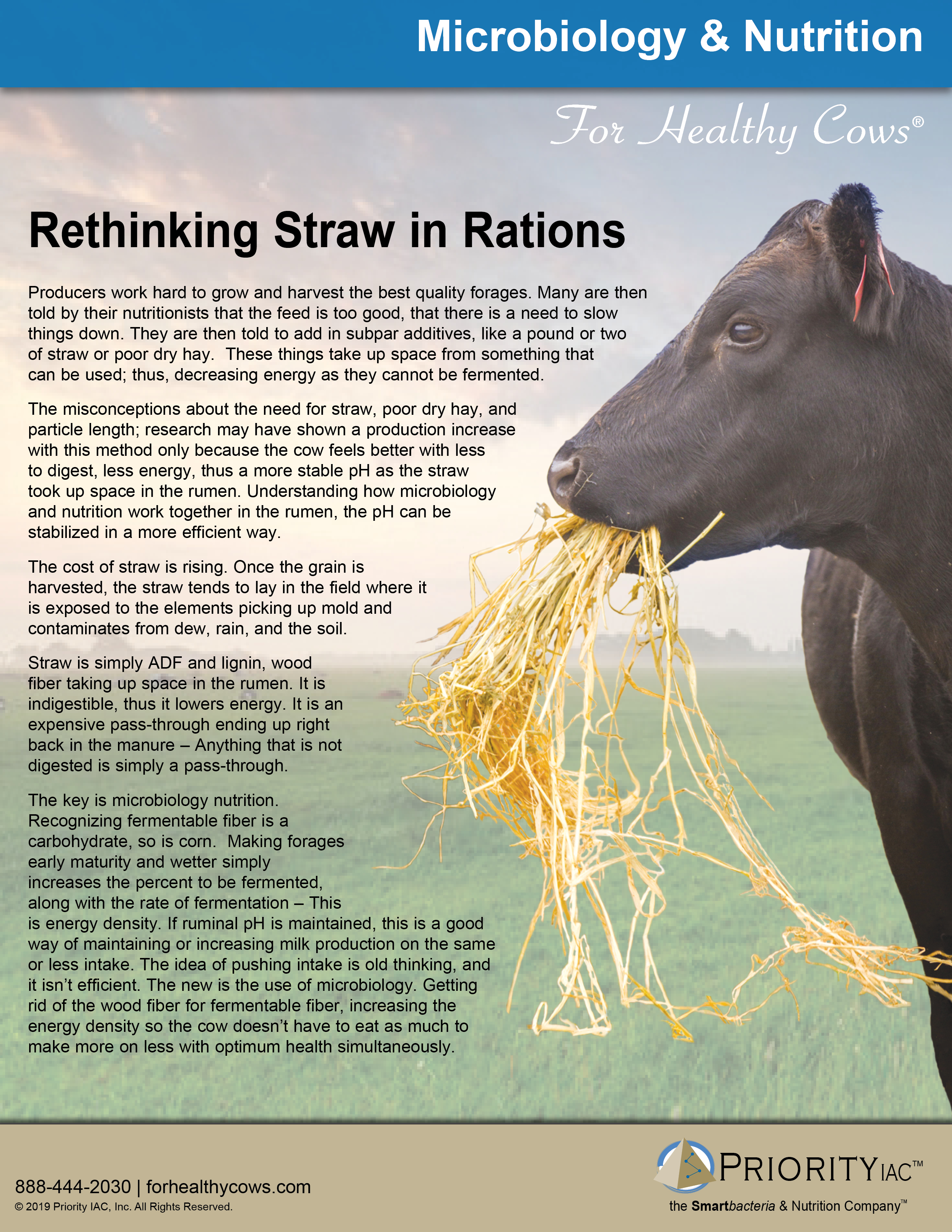