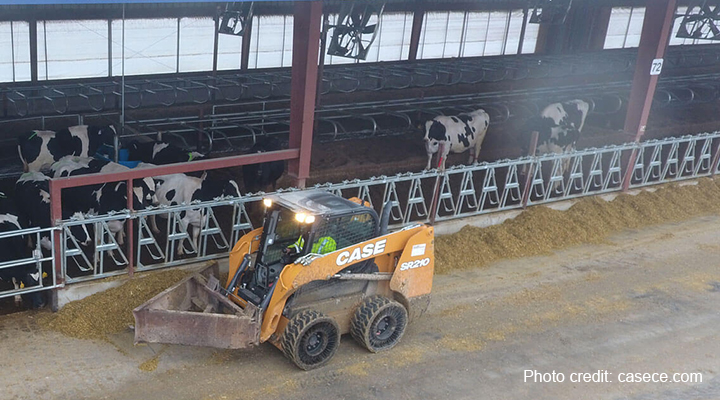 It seems odd that there is a feeding approach to drive intakes and balance the ration for high dry matter intakes (DMI), only to feed the leftovers as a waste to heifers. The problem is two-fold: 1) A very expensive diet is being feed to the heifers who don’t need it and 2) The diet was balanced for high dry matter pounds that were not consumed, if it wasn’t all eaten the cows didn’t get the ration.

The ration needs to be eaten to be a balanced ration. If it is balanced for 58lbs of intake, but a cow only eats 54 or 55lbs of DMI, the cow didn’t consume the ration. If a ration is fed for a specific amount, but there are refusals then part of the nutritional needs aren’t being met.  When the ration is balanced for a certain intake, but there are leftovers; then the cows’ needs aren’t being met.

Feeding for refusals doesn’t work because it leaves some of the herd unable to meet their nutritional needs, mostly the fresh cows and heifers as they are physically unable to consume enough. When the ration isn’t dense, it makes the cows work harder to reach the intake of the ration. An energy dense diet delivered through Microbiology Nutrition reduces the risk of ketosis for fresh cows as they get more in every bite.

Smartbacteria stabilize and maintain rumen pH. Priority has built principles to apply Microbiology Nutrition to be able to dense up the diet and reduce the intakes to get the same, or greater, energy load with less pounds of intake. This provides efficiency for the cow, ration, and producer.

Microbiology Nutrition provides producers the ability to serve their cows with an energy dense ration – A smaller package for bigger results.